Nick Jonas, 22, may not be one of the performers at the 2015 MTV Video Music Awards, but they let him kick-off the show by performing right on the red carpet. Nick was more than happy to perform his latest hit, “Levels,” and he definitely turned the heat up for his fans! 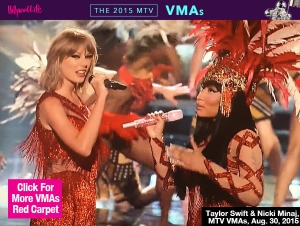 The performance has major significance, because when the VMA nominations came out, Nicki went OFF on Twitter…and Taylor thought she was shading her! When Nicki wasn’t nominated for Video of the Year, she tweeted, “If your video celebrates women with very slim bodies, you will be nominated for vid of the year.” Considering Taylor’s “Bad Blood” featured a ton of skinny models, the 25-year-old thought the comment was directed right at her, and wrote back, “I’ve done nothing but love and support you. It’s unlike you to pit women against each other. Maybe one of the men took your slot..”

Taylor Swift, 25, knows how to make an entrance! The singer showed up with a huge girl squad including Selena Gomez and Gigi Hadid at the MTV VMAs on Aug. 30 at the Microsoft Theater in Los Angeles, California, but all eyes were on Taylor’s dramatic eyeliner! She totally reminded us of the “Bad Blood” music video — she was hot then, and now!

Selena Gomez is such a fashionista! The 23-year-old singer walked the red carpet in a long sleeve black dress and it was incredibly sexy. We just love that she opted for such a chic and classic look. Plus, it showed off her enviable figure. We just hope she and Justin Bieber have a run in tonight because we’d love a glam pic of that fashionable pair together.

Taylor Swift, 25, was one of the first to arrive at the Video Music Awards on Aug. 30, but she didn’t show up alone! The singer attended the highly-anticipated awards show with a whole slew of her girlfriends from the “Bad Blood” video, and we are having some SERIOUS #SquadGoals envy! Even Selena Gomez was by her side — surprise!

She accessorized the way she usually does, with a ton of jewels. She rocked a long tusk necklace and delicate gold chokers, with huge pot-leaf gold hoops and a ton of gold bangles and rings.

Republicans intend to hammer Senate Democrats next month if they do not allow an up-or-down vote on a measure disapproving President Obama’s nuclear deal with Iran.

Democrats appear close to having enough support for the deal to bottle up the disapproval measure with procedural motions. If Republicans vote in a united bloc, they would need the support of six Democrats to break a filibuster, but only two Democrats have broken ranks so far.

If the resolution is filibustered, it would be a major victory for the White House, which wouldn’t have to use President Obama’s veto pen to protect the Iran deal