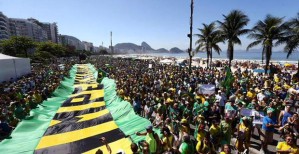 Called mostly by activist groups via social media, the demonstrations assailed Rousseff, whose standing in the polls has plunged amid a snowballing corruption scandal that has embroiled politicians from her Workers’ Party as well as a sputtering economy, a weakening currency and rising inflation.

But the protests drew relatively modest crowds, likely giving the president some breathing room. Huge numbers had come out for two earlier rounds of demonstrations this year.