Police searched Thursday for at least two gunmen who opened fire during a backyard party in suburban Pittsburgh, killing five people and wounding three others as they rushed toward the house to find cover.

The gunmen attacked the partygoers just before 11 p.m., firing from two different locations in what police described as an ambush-style attack.

“It looks like right now they were all fleeing toward the backdoor of the residence when the second gunman fired from the side of the yard,” said Lt. Andrew Schurman of the Allegheny County homicide unit. “They all seemed to get caught on the back porch.”

Four women and one man were killed. Two men were hospitalized in critical condition, and one woman in stable condition, police said.

Four of the victims were found dead on the porch.

Carl Morris and his son, Robert, were getting ready to leave their house across the street when they heard a volley of three shots, a pause, then gunfire lasting more than a minute. 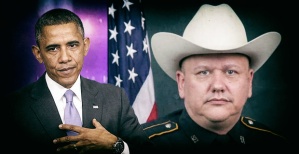 This afternoon, on my way to Alaska, I called Kathleen Goforth, the widow of Harris County Deputy Sheriff Darren Goforth – a veteran law enforcement officer who was contemptibly shot and killed over the weekend. On behalf of the American people, I offered Mrs. Goforth my condolences, and told her that Michelle and I would keep her and her family in our prayers. I also promised that I would continue to highlight the uncommon bravery that police officers show in our communities every single day. They put their lives on the line for our safety. Targeting police officers is completely unacceptable – an affront to civilized society. As I said in my State of the Union Address, we’ve got to be able to put ourselves in the shoes of the wife who won’t rest until the police officer she married walks through the door at the end of his shift. That comfort has been taken from Mrs. Goforth. So we must offer her our comfort – and continue to stand up for the safety of police officers wherever they serve.