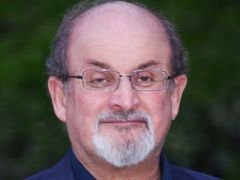 Author Salman Rushdie–against whom Iran’s Ayatollah Khomeini issued a death fatwa in 1989 because of his book “The Satanic Verses”–says that it is a miskake for President Barack Obama not to use the term “Islamic terrorism.”

“It’s a mistake that the president is making to not use the term Islamic terrorism,” Rushdie said Wednesday during a question-and-answer session hosted by New York University’s Washington, D.C. Academic Center.